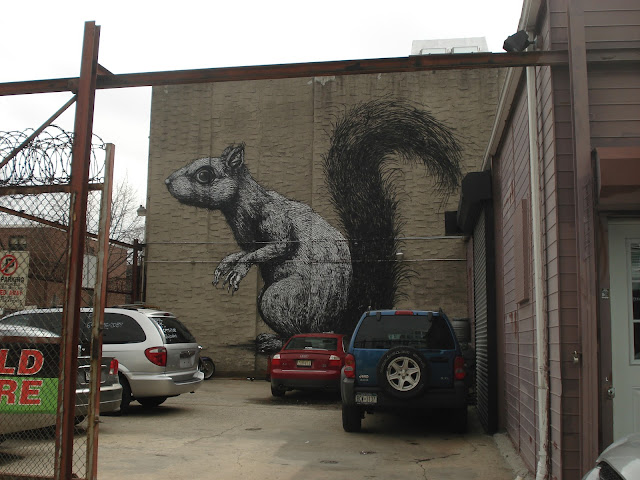 see this above piece? i took this photo back in the Spring when i was wandering about Brooklyn. it’s a ROA piece, who is one of the major players in the international street art scene.

this is unheard of in street culture, ’cause these things are usually painted over by business owners, or heavily tagged by other graffitists. The fact that it’s still standing, unblemished, is a mark of huge respect.

Also last spring, i was wandering down Grattan street in Bushwick, and found this below ROA (the skateboarder flew by just as i pressed down on the camera shutter, perfect timing! love this shot) 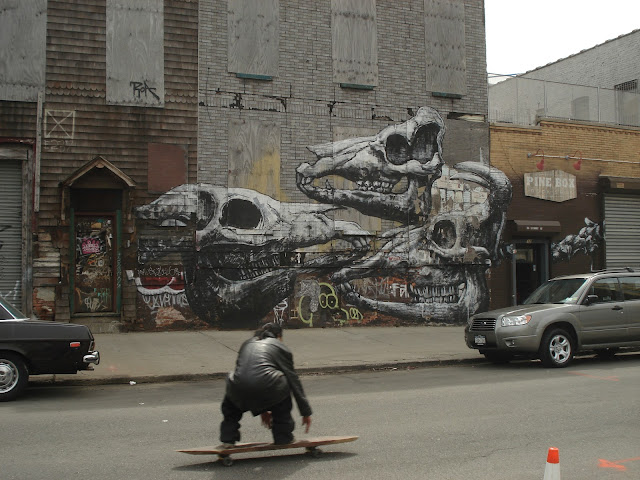 anyway, so i’m wandering around bushwick on Christmas Day because i knew that since everything would be closed, the streets would be empty and i could get some perfect shots of all the graffiti and street art…and i found some new ROA’s that i never found before!

i found this ROA on moore street…. had this shop been open, the protective garage door covering would have been rolled up and i never would have found it. thank you bastardized pagan holiday for making people close up shop!

i think i just came.

look at that detail, people. this isn’t stencil work, and it’s  not a wheatpaste either. ROA does this free hand with spray paint cans and brushes. fucking brilliant.

omg another ROA! i fink i found this one on Vandervoort Pl near Flushing Ave.

i fink i’ve seen photographs of this piece before. if that’s true, then this ROA has been up for some time… meaning that his works go largely untagged from the graff community and even local business owners choose to leave his work up.

Check out my ROA category for more of his work.

This entry was posted on December 27, 2011 by Christine Estima. It was filed under graffiti, new york city, photography, roa, street art, street culture .