The Madonna Tour of New York

Among many of my things to-do whilst in New York, one of them was The Madonna Tour of New York. This isn’t something that is organized and run by official tour guides. This is something I fashioned myself using Google. I’ve always been really inspired by Madonna’s life. Her music, I can take it or leave it, but I find her struggle for success really inspiring. Unlike most celebrities today who are famous through nepotism or for nefarious acts, Madonna made her own life. She arrived in New York with no money, knowing next to no one, and was even sexually assaulted. She squatted in buildings and barely scraped by for 5 years in New York, until she finally got that record deal in the early 1980s. So I’m not particularly interested in the Madonna of now, more of the Madonna from the late 70s. Every year or so, I reread Andrew Morton’s biography about her (which I bought 10 years ago in a second-hand bookstore for $3) and it really gives me a kick in the pants to do more with my life. To be more ambitious and driven.

Anyway, Morton’s book is so detailed about the places and people in her life in the late 70s that I realized I could actually (probably) find these places and meet these people whilst there. So after scouring the book once more for precise details, I set about fashioning my own Madonna tour of New York… one that visited most of the places that were a part of her tapestry. I also contacted one very important person from her life at that time (more on that later…)

First stop, the synagogue in Queens. 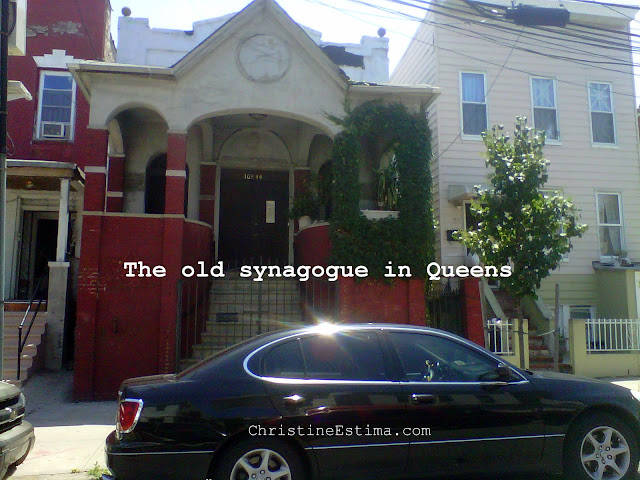 In the late 70s, Madonna met the Gilroy brothers, Dan and Ed. They were musicians in a band and she was still a dancer at this point. She began a relationship with Dan and promptly moved in with him and Ed. Dan and Ed at the time were living in this above synagogue deep in the heart of Corona, Queens. 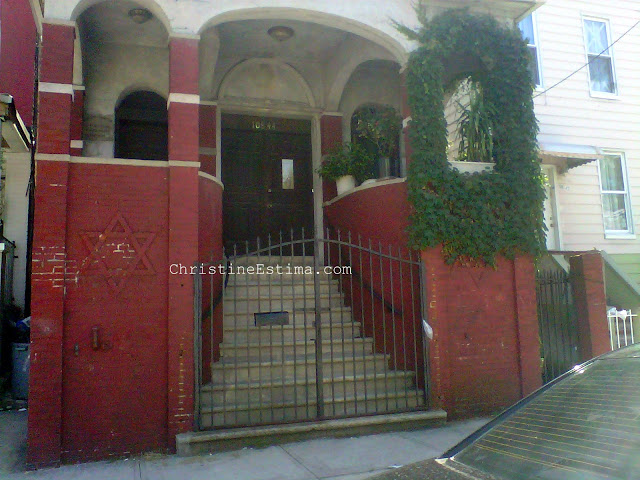 You can tell just by looking at it’s size and architecture that it was built sometime in the early 1900s and was converted into a house probably in the 1960s after falling into disrepair and disuse by the Jewish community. 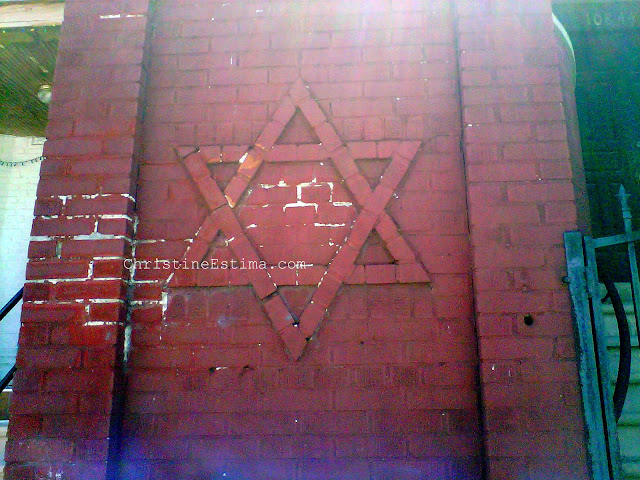 Ed Gilroy and his wife still live in this synagogue actually, but weren’t there when I visited, so I left a lil’ hello note in their mailbox. When Andrew Morton visited this synagogue, Ed took him down to the basement where 30 years prior, Dan had taught Madonna how to play the drums. She had been a drummer in their band The Breakfast Club before becoming the guitarist…. and finally wanting to take the front position. Also, in the basement, are reel-to-reel recordings they made back then of Madonna singing and playing, of her chatting with Dan and Ed playfully …. it’s like a time machine back to the 70s and of her unfamous life, Morton wrote. 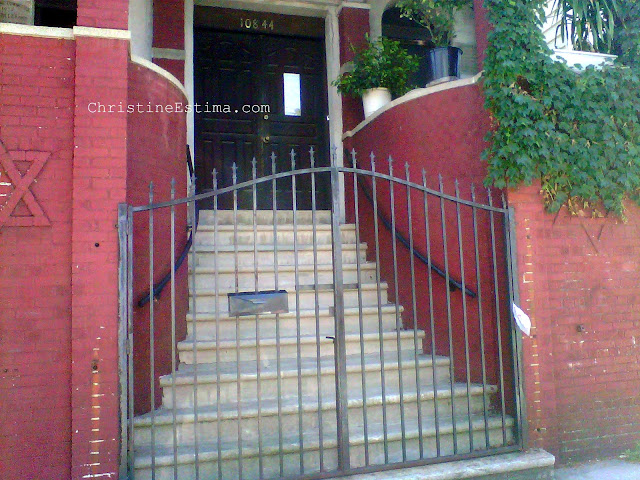 Standing here, I was imagining a young black-haired skinny Madonna, younger than I am now, bounding down these steps and heading for the subway to go into Manhattan, taking the exact same steps I had taken to get there by subway….. it was a pretty connecting and exciting thought.

Next stop …. The Russian Tea Room in Manhattan 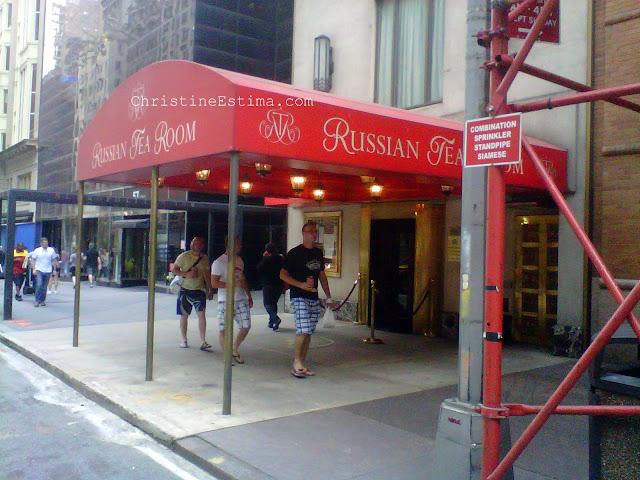 When Madonna first arrived in New York in the late 70s and was still a dancer, her dancing instructor (Pearl Lang) worried about how thin she was and how she was getting by, so she got Madonna a job at The Russian Tea Room on 57th. Now from all the sources I have read, she was a “hat check” girl there in the late 70s before getting fired. But I walked inside the TRTR and asked the hostess, and she said Madonna was a “coat check” girl in the early 80s. So I’m not sure which is correct, but either way, the hostess confirmed that yes, Madonna worked there.

Next stop …. The Music Building on the shitty west side. 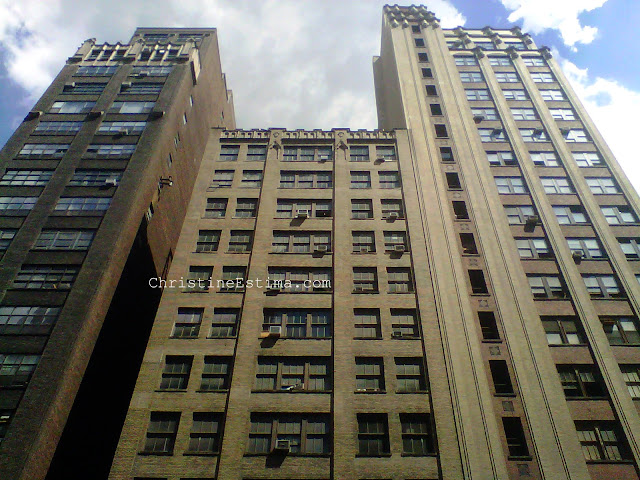 The Music Building is an infamous shitty building on 8th avenue in the shitty “Minnesota Strip” part of Manhattan that, in the early 80s, must have been 100x worse. Drugs, violence, crime, and then this towering inferno, floor after floor, of disgusting sweaty, smelly wannabe rock n’ roll superstars jamming all hours into the night, spilling out into the street.

This is also where Madonna recorded her first demos and met her first manager, Camille Barbone. 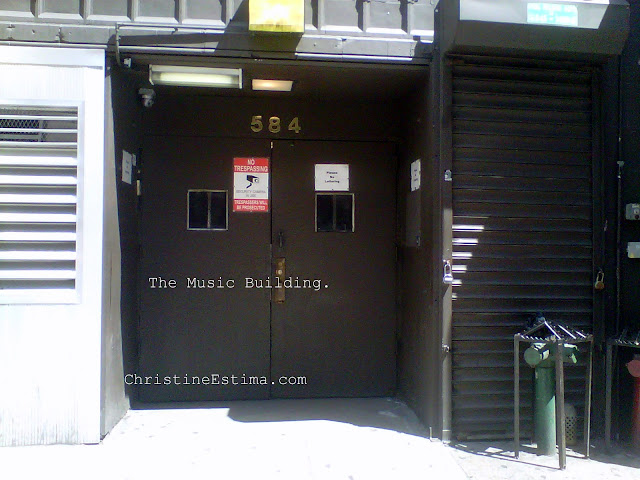 Madonna used to actually squat illegally in the music building and wash herself in the ladies loo. Fab Five Freddy once said that when he met Madonna, she smelled so bad and it seemed like she was the type to get around, hahaha. Anyway, I tried to go inside but the doors were locked (you need a fob key to get in) and I didn’t have an appointment (which you also need if you want to look around). 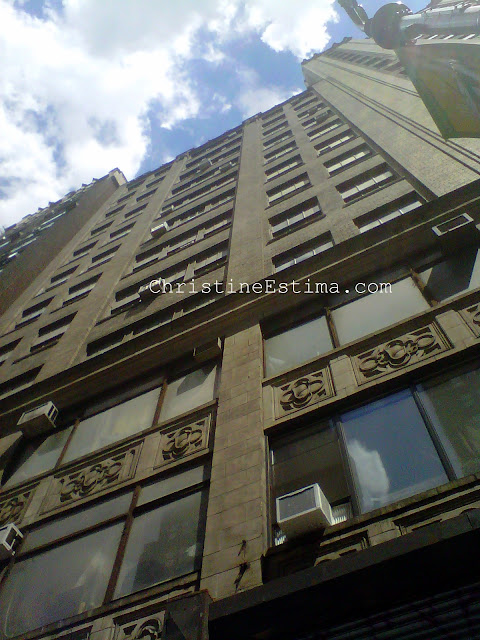 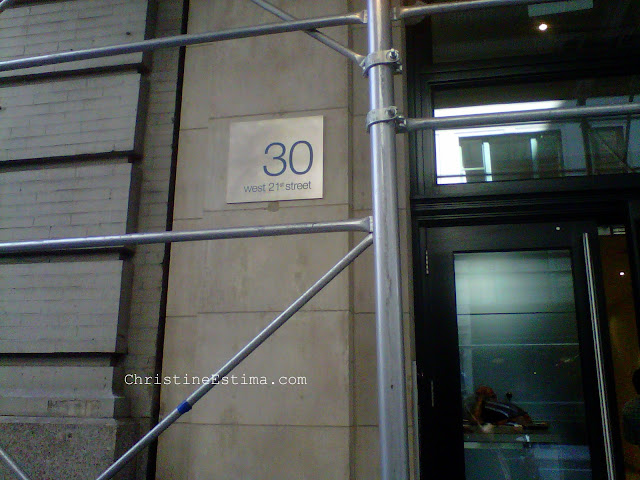 Next stop, 30 West 21st street, which now is a very gentrified and beautiful area, but 30 years ago it was … 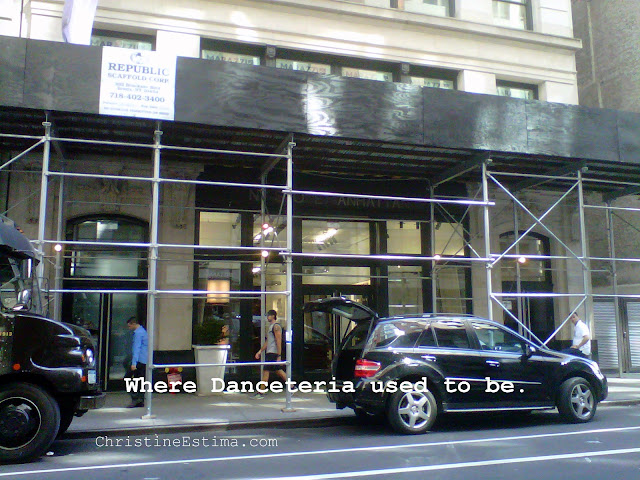 …where Danceteria used to be. Danceteria was the club where Madonna passed her demo tape to Mark Kamins (the DJ there, and sometime A & R rep, who briefly became her boyfriend) who then passed it on to Seymour Stein, head of Sire Records, who was laid up in the hospital after heart surgery and told Kamins to bring Madonna to him in the ward. Danceteria is also where Madonna had her first live performance of Everybody, and where she recorded her very first music video (Everybody). 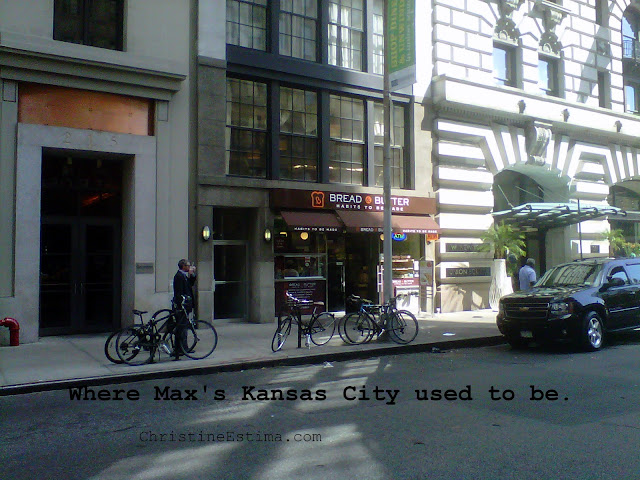 Next two stops were the former locations of Max’s Kansas City and CBGB’s, where Madonna and her early band Emmy played some of their first gigs. Emmy was actually Madonna’s nickname when she was younger so the band adopted it as their name. I have found some of Emmy’s recordings online, and I think my favourite is “Little Boy Lost.” It’s very punk-influenced and Madonna’s voice is so pure in it. She strains to hit some notes, but that’s what I love about it, she’s putting so much heart into it. Now they’d auto-tune out all her strain, which really is a sad thing. On “Little Boy Lost” you get to hear her voice unfiltered by subsequent technique and lessons. She had a lovely voice then, now it kind of sucks. When the critics in the 80s called her voice like “Minnie Mouse on helium” I think that really struck a chord with her and she has since tried to lower her octave (listen how deep she goes on “Papa Don’t Preach.”). But I kind of miss her spritely, natural voice. CBGBs only officially closed in 2006…. and I made my first ever NYC visit in 2007 so I missed it completely, but luckily the dude who took over the space and turned it into a shop kept most of the memorabillia around. 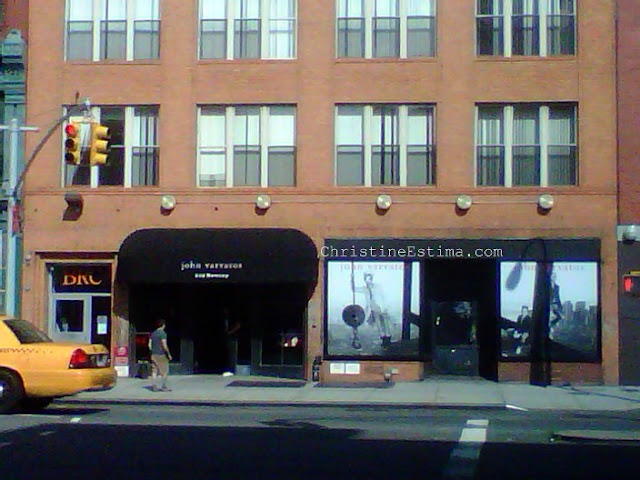 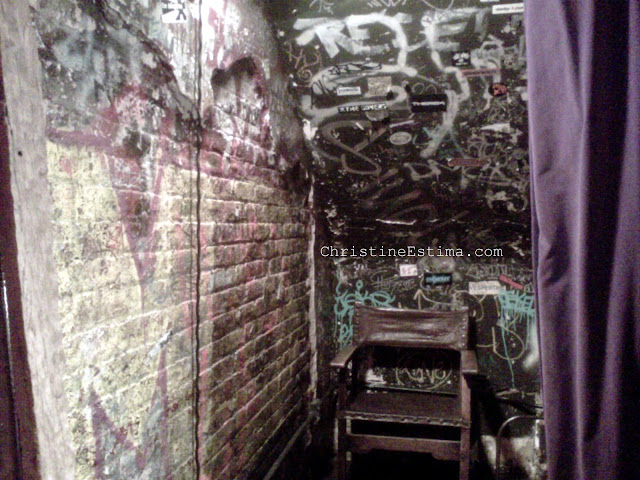 The walls were never painted over. This wall and space was almost right behind the former bar. 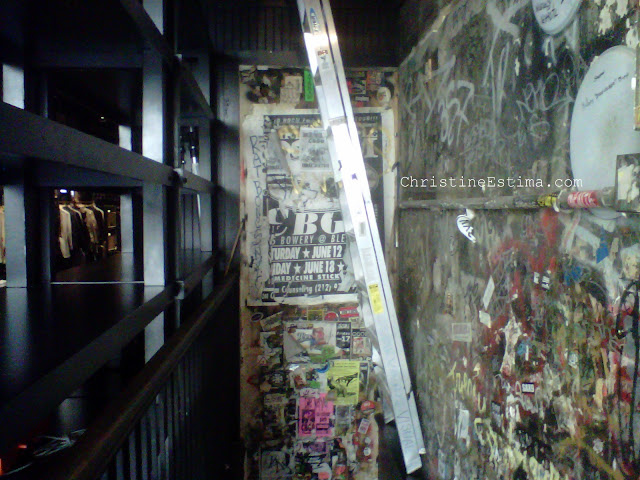 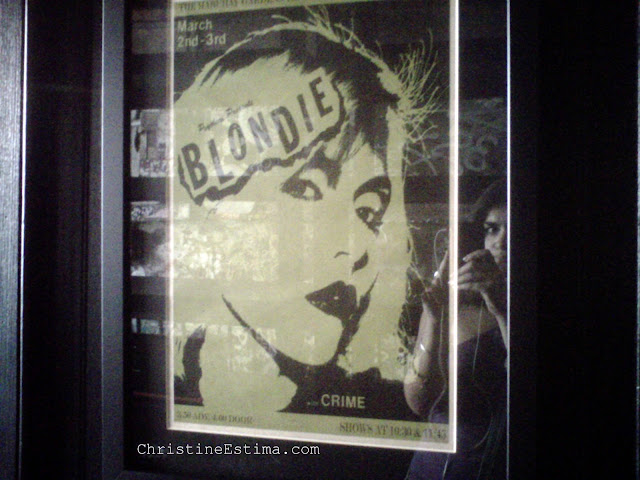 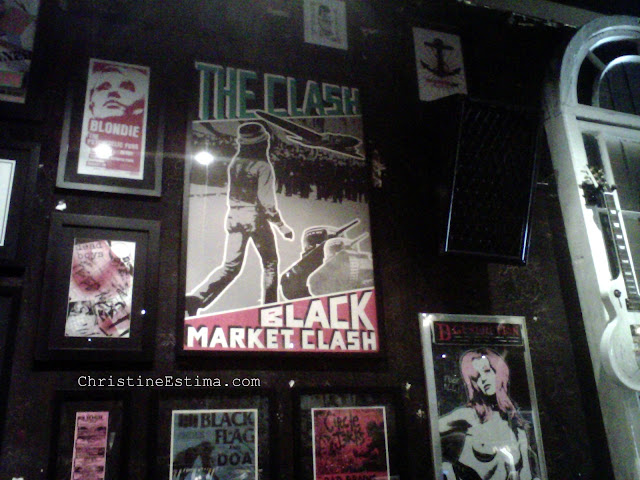 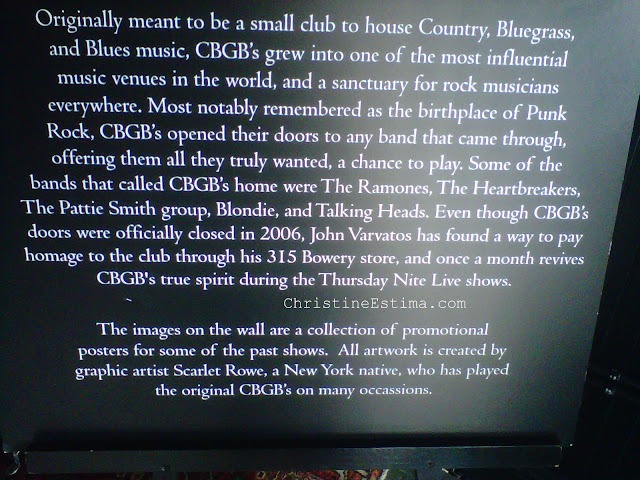 Now, as promised, here’s the story of the person I contacted …..

Through a lot of online digging and sleuthing, I found the mailing address of Dan Gilroy, Madonna’s former boyfriend (mentioned above in the synagogue section), and also the man who taught her how to play the drums and guitar…. and basically how to make music.

So I wrote him a hand-written letter a few weeks before I arrived in NYC, basically asking him if he would be okay meeting up with me for a cuppa and a chat.

I figured that by the time he got my snail-mail letter, I’d already be in NYC, so I gave him my email address as a reply method, and kept my fingers crossed.

Whilst in NYC, I received an email from him! He said he was now living in Texas (my letter had been forwarded to him there, so the mailing address I had found was technically wrong) so we couldn’t meet. I won’t include all of his letter here, for privacy reasons of course, but here are some select lines:

“… i enjoyed your letter. you’re a smart and upbeat writer. smarts and upbeatedness don’t get together all that often. ….
i really don’t get asked much about way back when (ed’s note, he means his time with madonna); i don’t mind when i am but unless something like the r&r hall of fame induction happens, where she made a nice personal reference to back then ( ed’s note: when she was inducted in the rock and roll hall of fame, she thanked him and ed gilroy), or the super bowl show and all the fanfare and attendant curiosity, it’s fairly here and now around here...
…I’m guessing i don’t have to tell you to have a great and fun trip. keep that writing thing happening, Christine   -dan  “

He’s so kind!!! His letter was so generous and giving, he didn’t even have to write me back at all, so I was so grateful for his response. If that man wasn’t like 60 years old, I’d be all up in his grill.

So there you have it, that was my own personal Madonna tour of New York.

I would highly recommend it:)

Madonna once said that what you do in life, and how far you go, depends on how hungry you are.