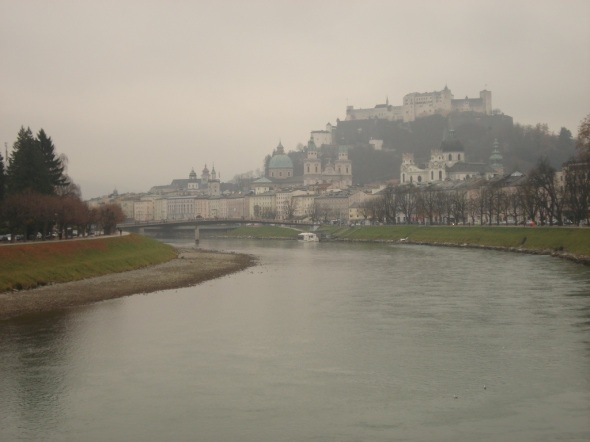 SALZBURG! Birthplace of Mozart and ZOMG THE SOUND OF MUSIC!

The hills are alive with the sound of Chrissy.

I have been dreaming of coming to this town ever since I was a little girl and my mum first showed me The Sound Of Music. I didn’t think mountains and streets could co-exist like this. It looks like a fairy tale!

And the entire time I’ve been walking around the city, I keep repeating to myself the lines from a specific scene in The Sound Of Music:

“Do you mean to tell me that my children have been roaming about Salzburg dressed up in nothing but some old drapes!?”

“Mm-hmm, and having a marvellous time.”

“Straight-jackets, if you’ll forgive me.”

“I WILL NOT FORGIVE YOU FOR THAT.”

Yes, I kind of know the movie off by heart. And so do you. But you know who doesn’t? Austrians! For some reason, the story of Maria von Trapp never made an impact here, and even though the movie has been seen by billions, it remains virtually unknown here. My Couchsurfing hosts Konstantin and Clemens can attest to that. I gave them a synopsis of Maria von Trapp’s story and they shrugged.

Aw. Horse-drawn carriages are quaint and fun for tourists and stuff, but they can’t be much fun for the horses. I see this in a lot of European cities, and in Montreal, but the horses end up weeing all over themselves and they look pretty cold.

Geburthaus means birthplace! Mozart, DA MAN, the original gang of wolves (see what I did there?), was born here! So exciting!

I was amazed this building was still standing unscathed after hundreds of years, so I asked Clemens, who was showing me around, how much damage Salzburg sustained during WWII, and he said virtually none. Somehow, Salzburg wasn’t a battle ground, even though it was annexed by Hitler’s Germany. And what about the First World War? I looked around and saw that almost all the buildings surrounding us were hundreds of years old. 1329. 1642. 1403. Etc. they were all dated. HOW IS THIS POSSIBLE! 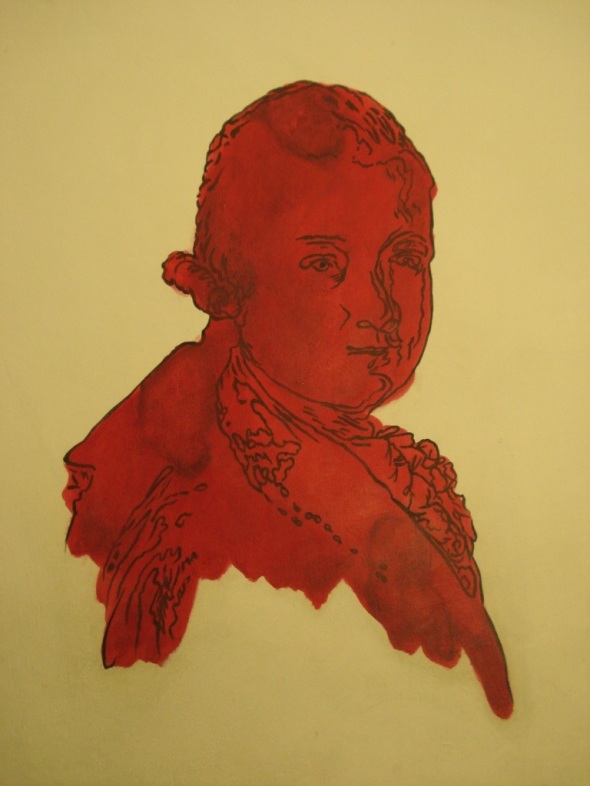 I told Clemens that I’m a big Mozart fan. I used to play his music all the time in high school when I performed in the Symphony Orchestra with my viola. And even my iPod has his “Piano concerto no23 in A major, k.488” on it which I like to listen to when I’m writing. Clemens seemed a bit shocked. Him and konstantin like Eminem.

I didn’t go inside the Geburthaus because you had to pay, and this sistah is on a strit budget, yo.

Then I visited the place where Mozart lived for most of his life.

Again, I wasn’t about to pay a €15 entry fee. For that price, I better find Mozart alive and talking inside!

Remember that scene where Maria sings to the children, “when you know the notes to sing, you can sing most anything?” In that park? THIS IS THE PARK!

I may need confirmation on this, but I’m pretty sure these are the stairs that the children and Maria run up and down at the finale of that number, and Maria’s grabbing her head because she may not be able to hold the note much longer and the kids sing, “SO DOE!” Yeah, I think this is it.

The stairs from behind. For some reason, the park was blocked off, and Clemens said it wasn’t usually. I betcha they knew I was coming.

There’s an overhead shot of this fountain, and the children are singing and marching along the rim while singing.

High on a hill was a lonely Chrissy…. 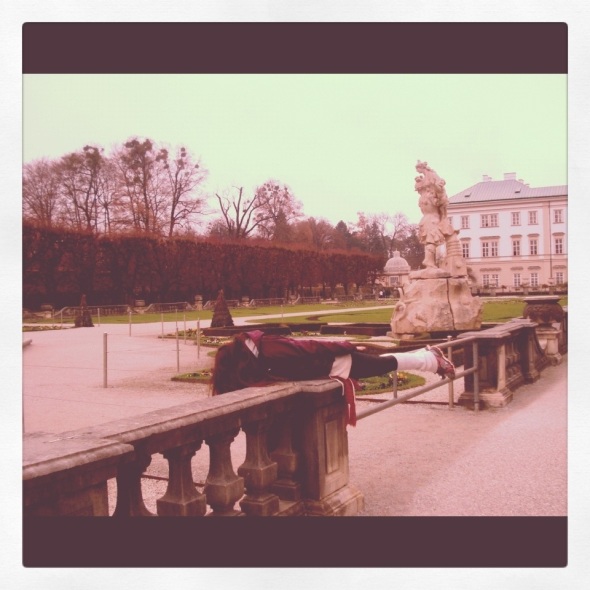 Ok this is a poor shot (was trying to crop out all the bloody tourists …. Because I’m no tourist … Ahem), but this is in the movie as well. In the beginning, when Maria is on her way to the von trapp mansion, she sings I Have Confidence and passes under these arches. If you pay close attention to that quick scene, you can see the real Maria von Trapp walking in the background.

I also visited the Stifte Nonnberg where all the convent exteriors were shot, but I couldn’t find any exact places that I saw in the film. A lot of those scenes, like the scene at the end where the family hides behind gravestones, were actually shot on a soundstage in Los Angeles. I also visited the festival halls where they filmed the scene at the end where the family sings in the festival before fleeing the Nazis, but it wasn’t open inside to the public. I mean, come on! I came all this way! 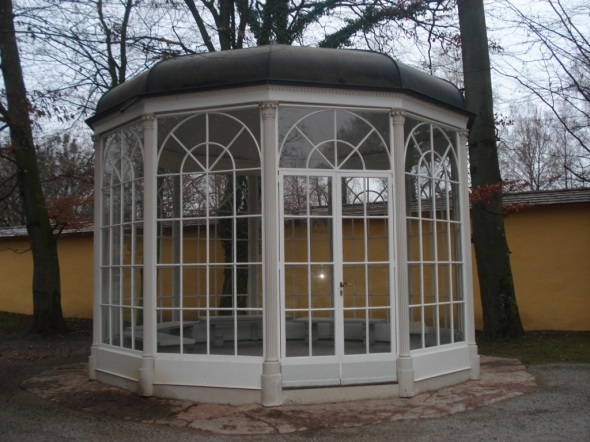 But look look look! LOOK WHAT I FOUND OUTSIDE HELLBRUN CASTLE!

I am sixteen going on seventeen, I know that I’m naive! Fellows I meet may tell me I’m sweet and WILLINGLY I BELIEVE.

Zomg this is like the best scene in the movie too!

I love it when Rolf kisses Liesl and then runs out into the rain, and she slowly heaves outside this pavilion and squeals in delight! It’s like the greatest thing ever!

And that whole dance number in here where she stomps around on the benches, and when she comes to the gap between the benches, he kneels down and gives her his knee! ROMANCE. I need a man to do that for me. Like ASAP.

And remember that scene where they plank outside the pavilion? Wait ….. What? 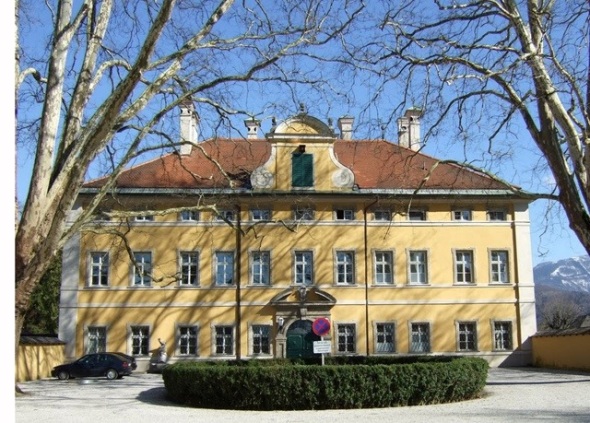 I didn’t take this photo, but this is Schloss Frohnburg where they shot the Von Trapp house exteriors. I found this castle tonight, but when I arrived, it looked like this ….

dark! Too dark! And no lamps or floodlights! 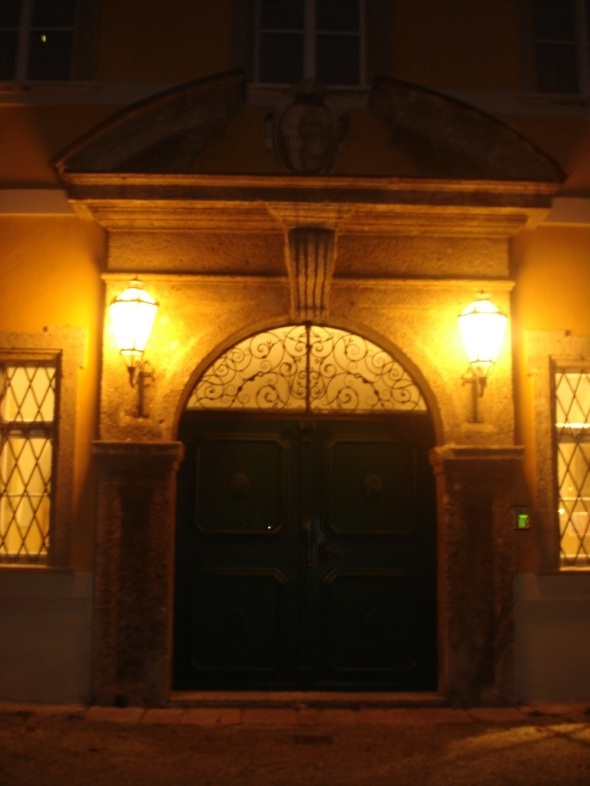 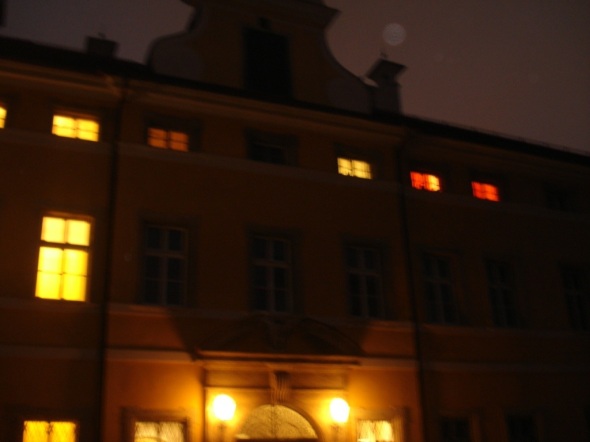 and Liesl says she can climb up there when its raining. Brigitta can do it with a whole Jar of spiders in her hands! 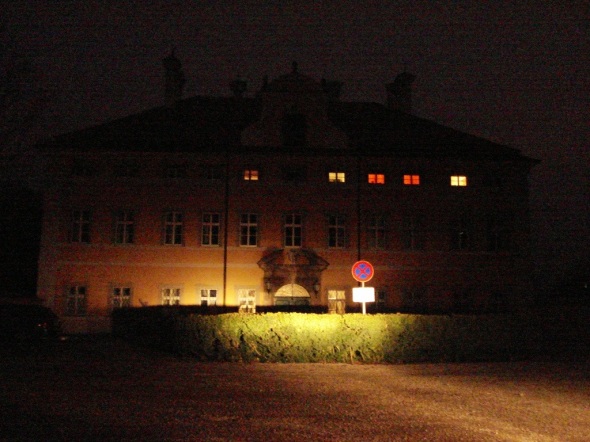 The only reason I was able to get these shots is because Clemens aimed his car’s headlights at the castle so I could photograph it. I didn’t at all get the shots I wanted, it was still too dark, but WHATEVER I WAS THERE! I MADE IT AFTER 30 YEARS OF WATCHING THIS MOVIE! 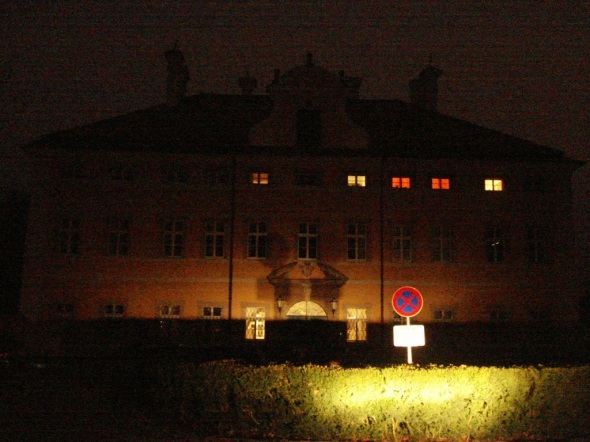 It’s beautiful and I want to move here. 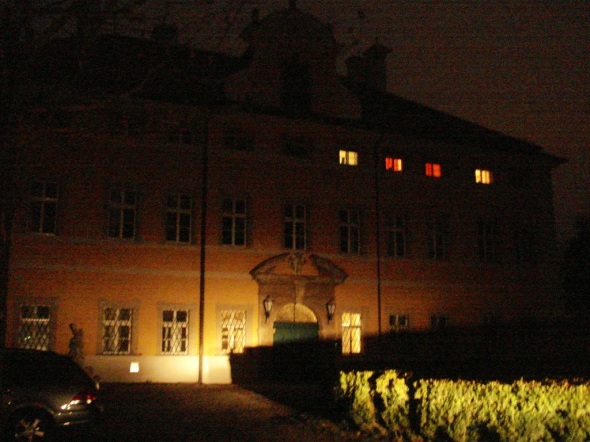 ok, back to the beauty of Salzburg’s streets. 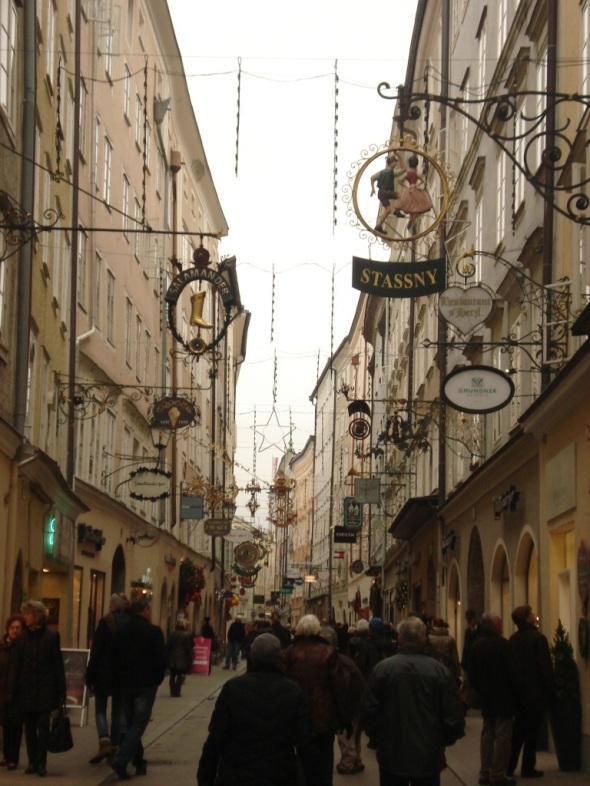 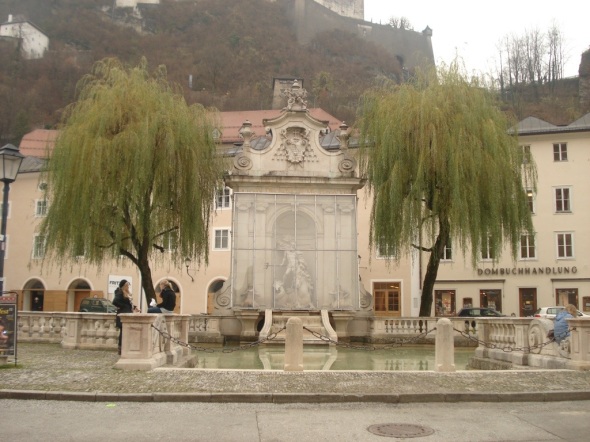 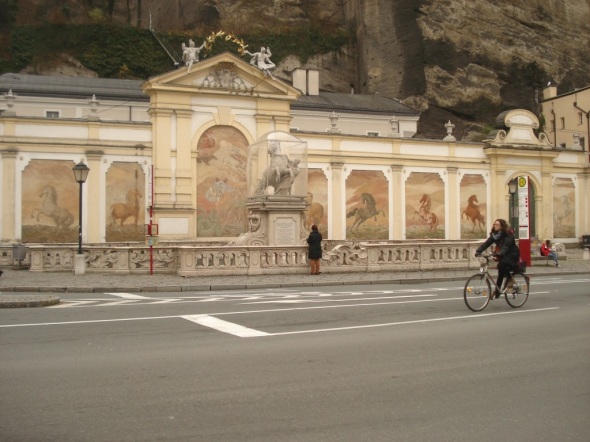 small and white, clean and bright, you look happy to me, to me

I wanted photos of this place because you can totally tell by the signage and font used on this sign just how old this shop is. That signage automatically dates it to approximately the 1930s or 1940s. But the building itself has been around since the 1500s! 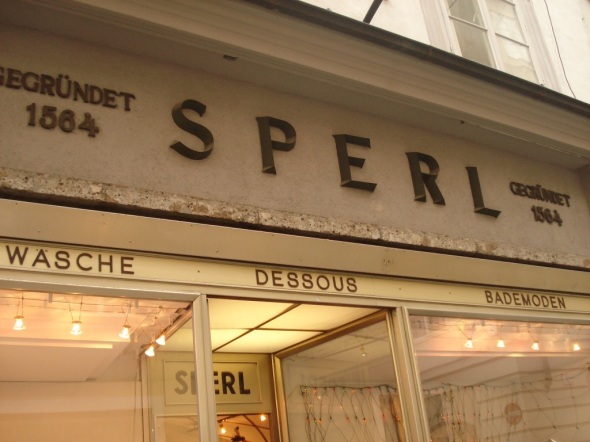 “Where they burn books, so too will they in the end burn human beings.”-Heinrich Heine

To laugh like a brook when it trips and falls over stones on its way.

To sing through the night like a lark who is learning to pray.

Here’s how I spent my money today. You know, it’s amazing how little you actually have to spend while travelling if you just plan ahead! People always say they don’t travel because it’s too expensive! Look at me, I’m only spending €15 a day and I’m living it up! Get inspired, munchkins! Buy the ticket, take the ride.

This entry was posted on November 28, 2012 by Christine Estima. It was filed under Eurail 2012, photography, travel .