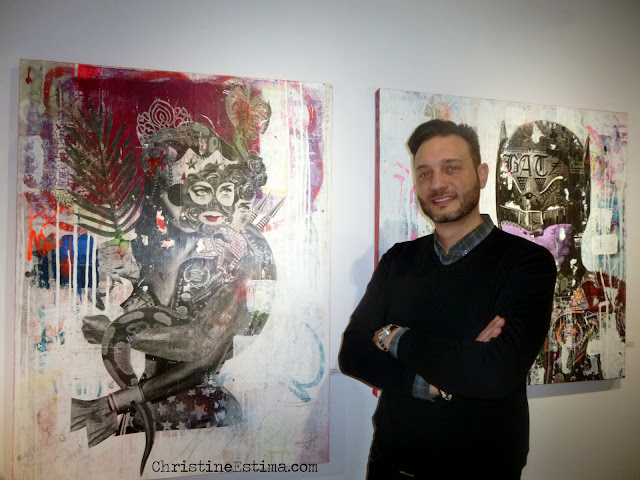 Recently I was invited on a personal tour of Station 16 Gallery in Montreal. I’ve been friendly with its founder Carlo for about four years now, ever since I facilitated an introduction between him and a local street artist. So when I told him that I would be back in my old Montreal stomping grounds, he took a couple hours out of his busy day to show me around the ever-expanding gallery. 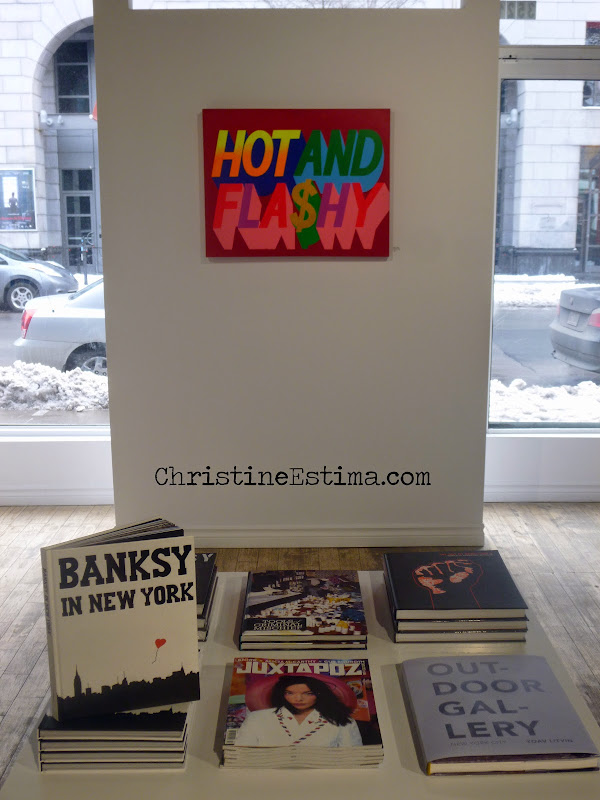 Station 16 is located on Boulevard St-Laurent in the heart of le plateau, where the gallery’s presence has boosted the community’s economy and sprouted new growth and development for local businesses. Montreal was hit hard by the economic downturn, and there are still many empty retail spaces around. So Station 16 partnered with the annual Mural Festival to reinvigorate interest in this historical and trendy area. 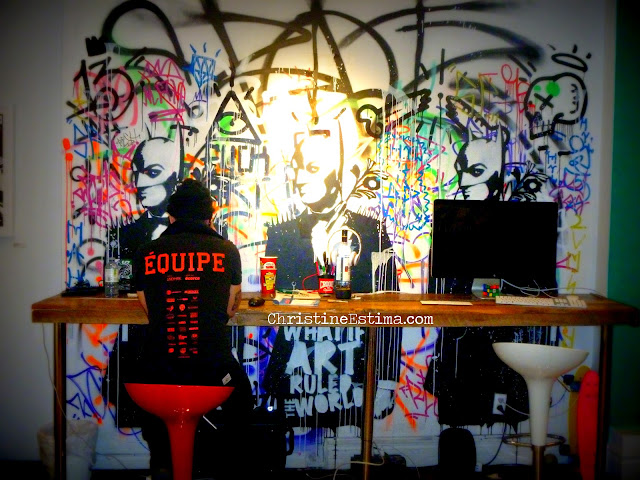 The goal of Station 16 is to feature and promote local urban artists as well as international favourites. The great thing I noticed when I entered the gallery was how busy it was. Most art galleries are usually very quiet, with one or two patrons an hour, and the receptionists’ shoes usually cost more than your entire annual salary. For many people, visiting art galleries is an intimidating and perhaps snobby-elite experience that feels alienating and ostracising. Not Station 16. Kids, teenagers, families, tourists, street art enthusiasts, art collectors, and dealers abounded the ground-level gallery. It’s a very inclusive and welcoming experience, with a no-pressure enviro, and fosters a sense of community. I think that encouraging everyday people in the process of appreciating, critiquing, and collecting pieces of art is a good thing, and removes the exclusivity that surrounds the art world. 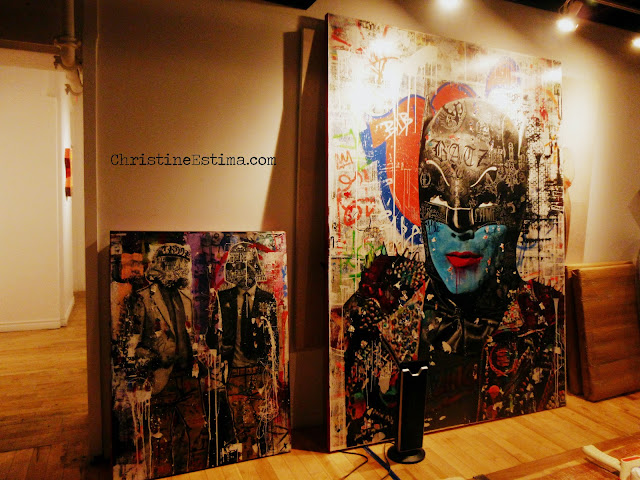 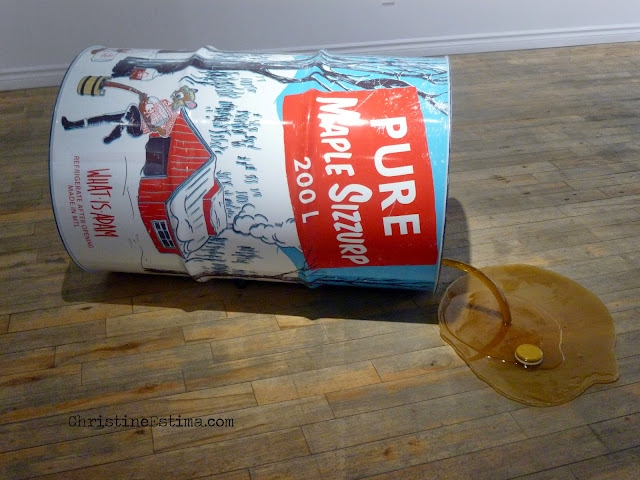 Pure Maple Sizzurp piece by What Is Adam, like an Warhol-throwback! 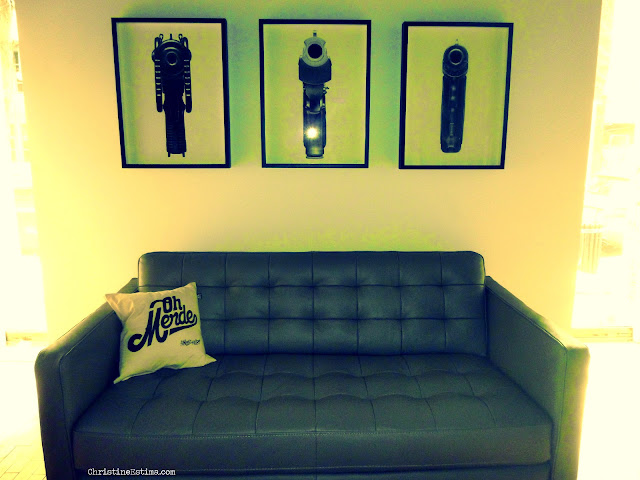 Took me a moment to realize those are guns. 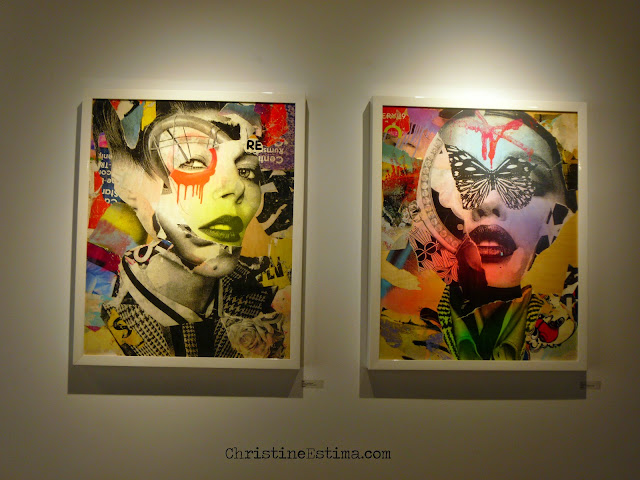 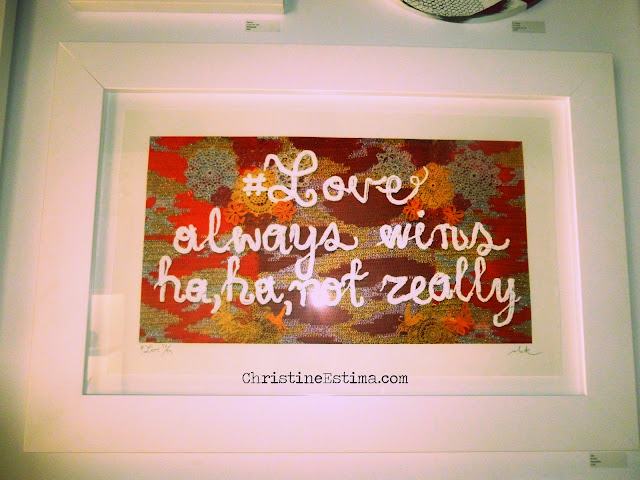 Olek, my beloved guerilla-knitting-yarn-bombing babe with a clever turn of phrase here. This is actually a silkscreen of her work, but it comes out very 3D! It looks like there’s actual yarn in there! I’ve photographed her in Montreal, NYC, and London! 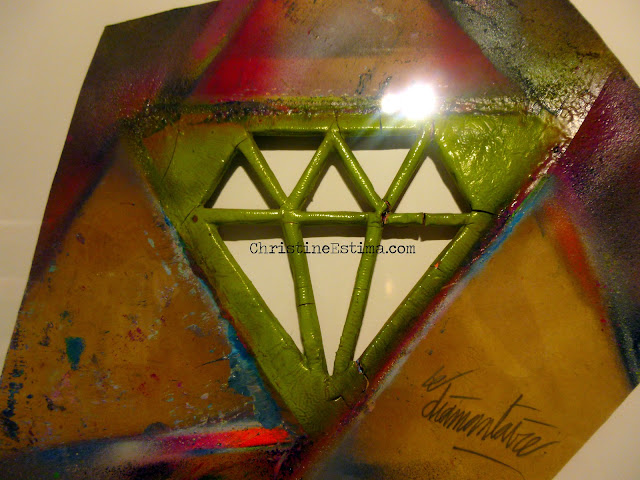 Le Diamantaire! You can’t turn a single corner in Paris without running into his street diamonds. They’re prolific! 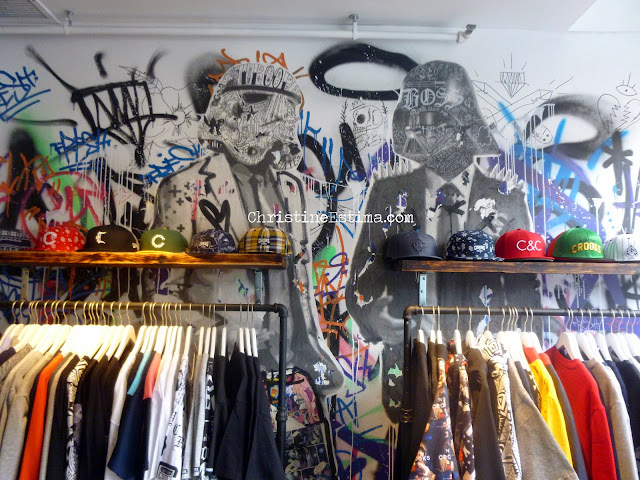 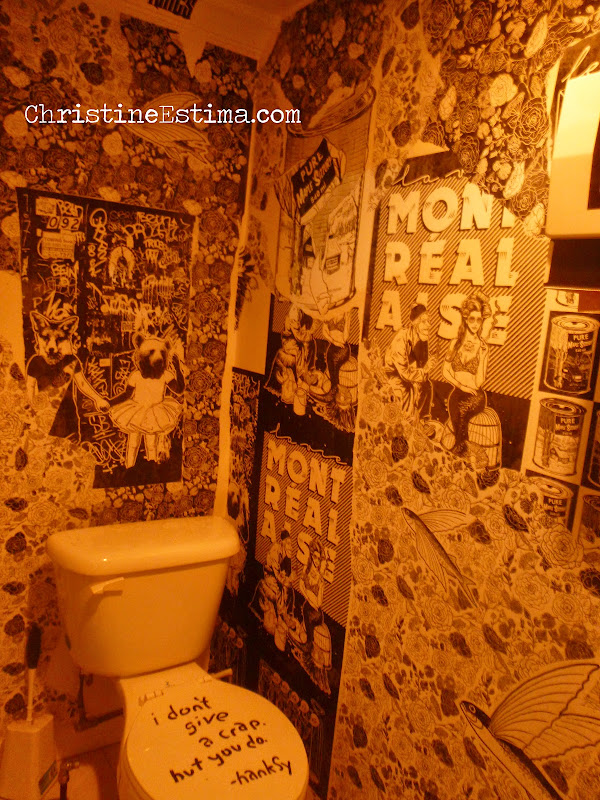 Now this is my kind of toilet. The entire walls are covered in What Is Adam pieces, and what’s that on the loo? 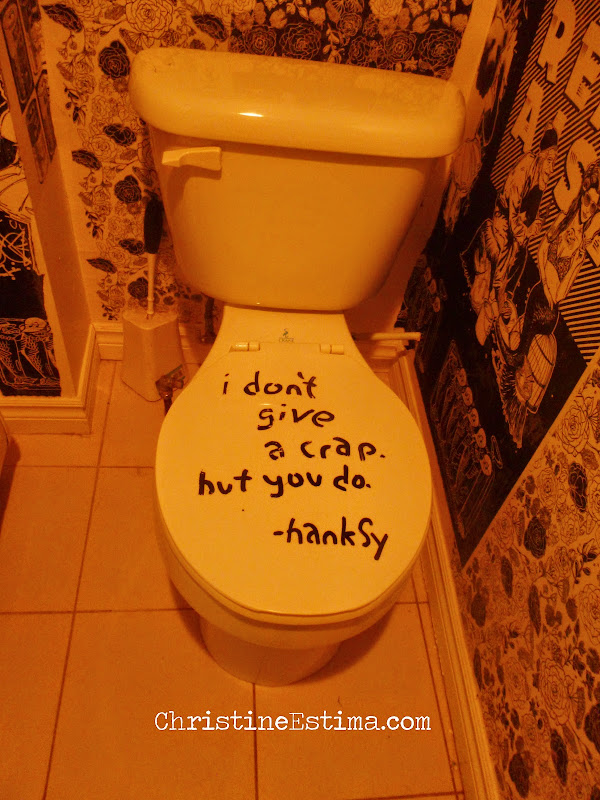 BACK OFF HE’S MY BOYFRIEND. Get your own. 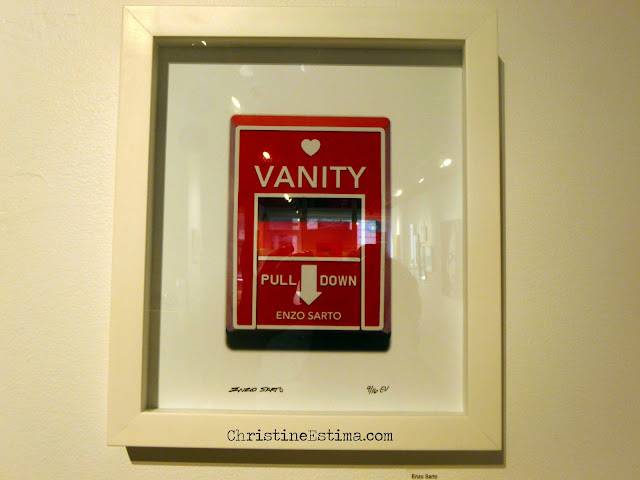 Enzo Sarto is one half of my NYC favourite Enzo & Nio! 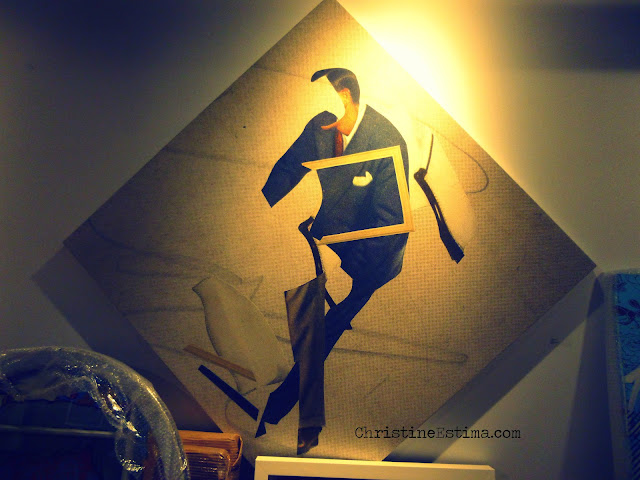 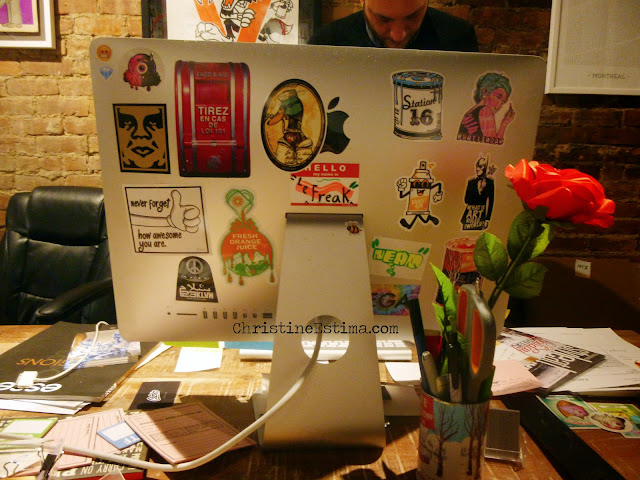 This is the back of Carlo’s computer! I see WIA, Stikki Peaches, Enzo & Nio, Shepard Fairy…. “Never forget how awesome you are.” 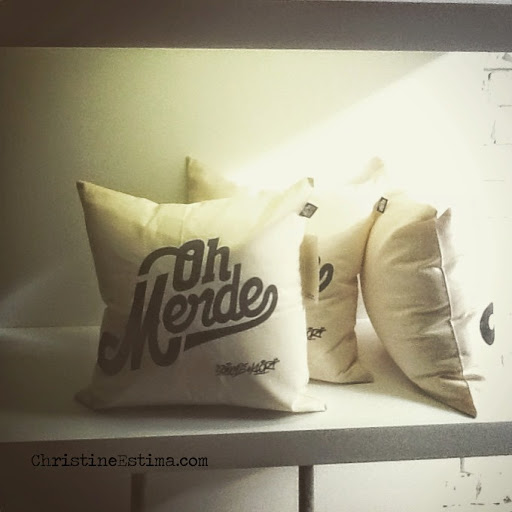 Station 16 is located at 3523 Boul St-Laurent in Montreal, within walking distance from metro stops Mont-Royal or Sherbrooke. If you go, tell them Chris says hi!

I’m alive, and for some reason I was certain my plane would fall out of the sky. As I left New York I cried and cried, so much so that the flight attendant had to check on me to make sure I was okay. I was never like this before, I have travelled all around the world on my own and taken countless flights, but I was never so nervous like this. Perhaps over time, everyone’s luck drops to zero, and I was certain my time was due.

I’m delighted to report how wrong I was.

After an uncomfortably hot and long stopover in Doha, I arrived in Bangkok and the first thing I noticed was how lovely the city and the people are. It’s not overcrowded and chaotic like Mumbai, it’s not crumbling under the weight of crime and violence like Lima, it’s not over-sexualized like Rio de Janeiro, it’s not still repairing from a war like Kosovo, and it’s not got a huge gherkin shoved up its backside like Paris.

Everyone is pretty much the same the world over- we all love our kids, we all want them to do well, we all need a roof over our heads, and we all need to eat.

I took the airport sky train into the city centre and hopped into a taxi to take me to my hostel near the infamous Khao San Road. On the ride, I noticed huge shopping complexes, long stretches of green in the public gardens, temples dedicated to Buddha, spacious tuk tuks (compared to the cramped dinky ones in India), and the motortaxis I had heard so much about.

Motortaxis are basically licensed motorcyclists whom you flag down and hop on as if they were taxis. Everyone uses them and they seem pretty efficient, fast, and ubiquitous. I saw a couple of women in skirts riding on them sideways.

They ride them sideways because it used to be culturally inappropriate for women to straddle them as men do (in the west, when we all rode horses everywhere, it was the same restriction, and they even made women’s sideways saddles). I bristled at the idea of riding a speeding motortaxi sideways because I wouldn’t feel safe, but then I noticed other women straddling. Phewf!

Khao San road is where all the backpackers conglomerate, and I immediately felt like my backpacking couture paled in comparison to some of the others wandering about. Silly thing to be worried about, I know, but some backpackers make it seem effortless, and I always feel like people will point to my attire and scream, “she’s not a real backpacker!”

Fuck you, I’ve been backpacking for seven straight years! Since I was 24 and I’m now 31! I’ve earned the right to wear whatever I damn well please.

So I grabbed lunch on Khao San road, there are so many street vendors and all of them have vegetarian options ( bless you Asia!). I got pad Thai with egg and a bottle of water for about $1. I also wanted to get one of the chopped up mangos they were selling for less than $1 but I was so tired that I returned to the hostel and crashed for 11 hours in my little white bunk.

I’ve already made a friend, my bunkmate Andy from London, who as it turns out is moving to Toronto in November! We’re gonna go for brekkie in the morning. One reason to love hostels.

Right now it’s quarter to three in the morning and a few bunks down I can hear some drunken Brits swapping spit and playing tonsil hockey. One reason to loathe hostels.

Even playing field I suppose.

Off to enjoy the beginnings of my SituAsian, expect photos soon!

In the meantime, enjoy one of the street art photos I took whilst still in nyc.

This is by Dain, whom I have blogged about before, and it was on Ochard near Delancey in manhattan.

stained with your face

these are by street artist Dain.