The Women and Unborn Children of 9/11 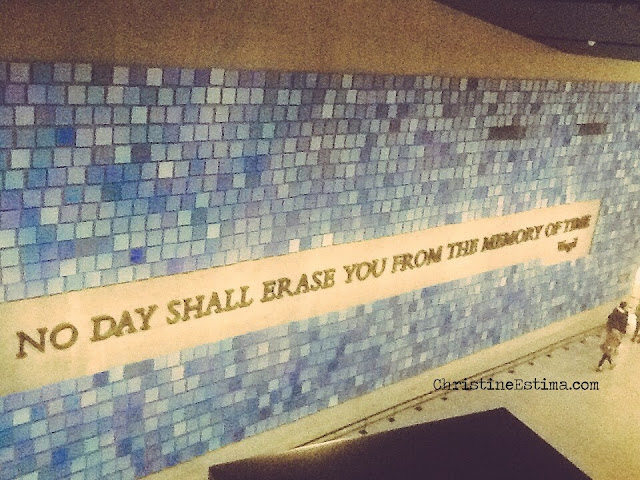 I’ve spent the past month in New York City; lots was seen, done, experienced and felt. Joyous, ephemeral, exhilarating, but I will get to that in later posts. The only thing I want to talk about right now was my visit to new 9/11 Memorial Museum at the World Trade Centre complex. It’s free on Tuesday evenings if you don’t mind lining up outside in the snow for a while (the line moves quickly). In most sections of the museum, photography isn’t allowed, so I couldn’t capture the artifacts  procured on display (pieces of the airplanes, filing cabinets, destroyed firetrucks, twisted metal and steel support beams…) or the personal belongings to many of the victims (almost blemish-free wallets and purses, bifocals, photographs, watches, bracelets and other jewellery)… But I must say that most of the information contained within the museum I had already seen on YouTube. In fact, I think I’ve seen more on YouTube than contained within the museum. However, the transcription of the blackbox flight deck recorder was really interesting, especially the translation from Arabic to English of the terrorists. And the reconstruction of events was really helpful. Each room has a box of tissues in it too, which I thought was a nice touch. It can get rather emotional in there. If you decide to go, prepare yourself for the worst. 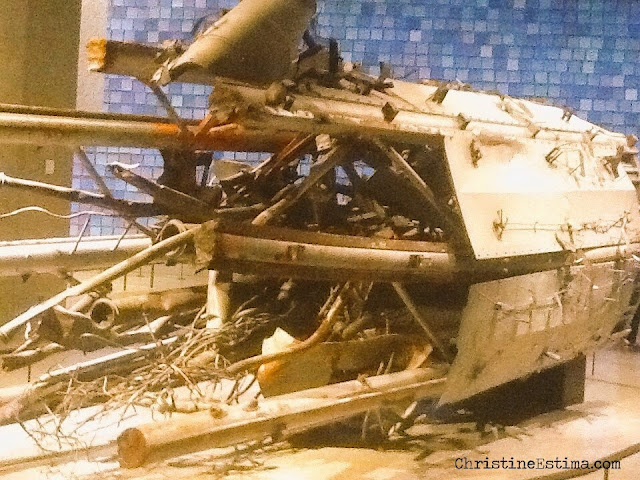 In any case, I went back a second time after my night visit to the museum to check out the names along the two memorial fountains in the complex where the North and South towers once stood. I find it rather appropriate that fountains with a massive drop of water should symbolize the towers and the people as they fell. The names of the almost 3,000 people who died are engraved on the sides of both fountains. 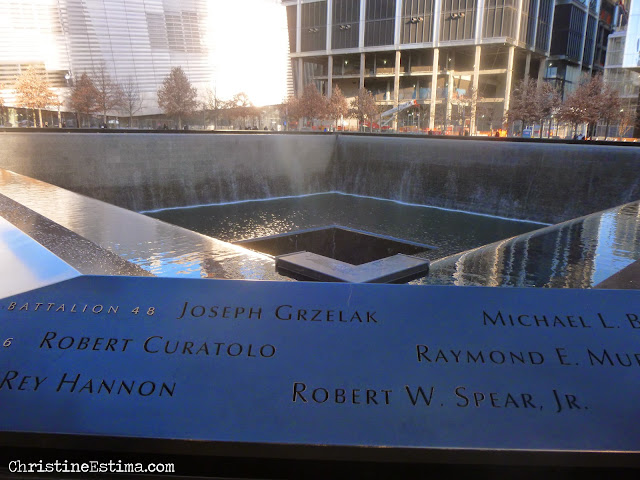 What I wasn’t expecting was how many of the women murdered on 9/11 were pregnant. It’s actually really disturbing. 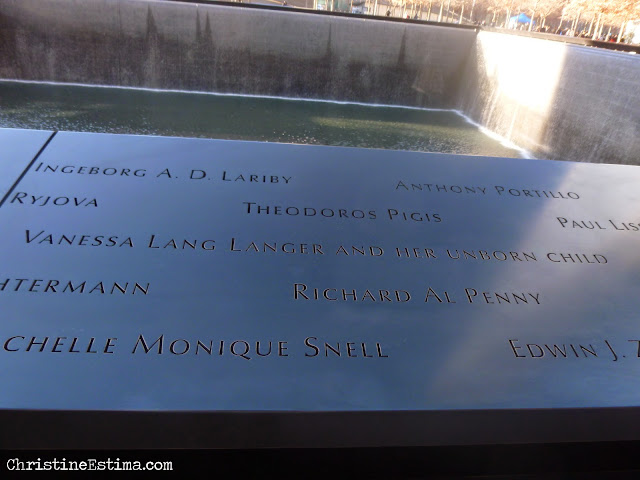 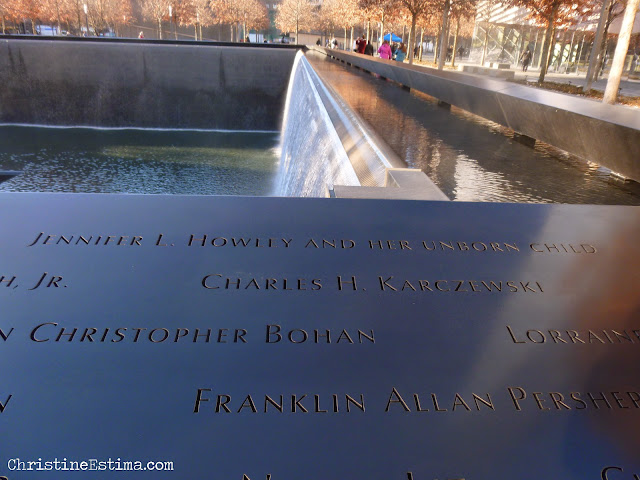 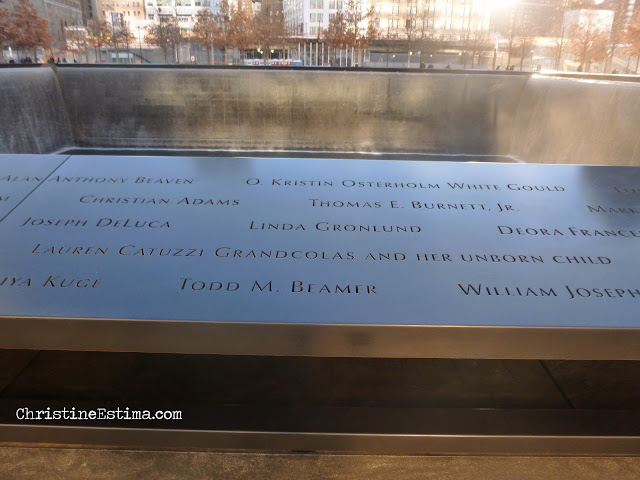 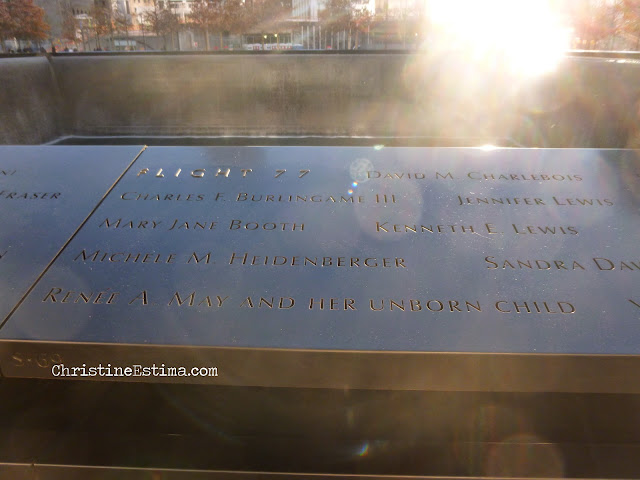 Renne A May and her unborn child 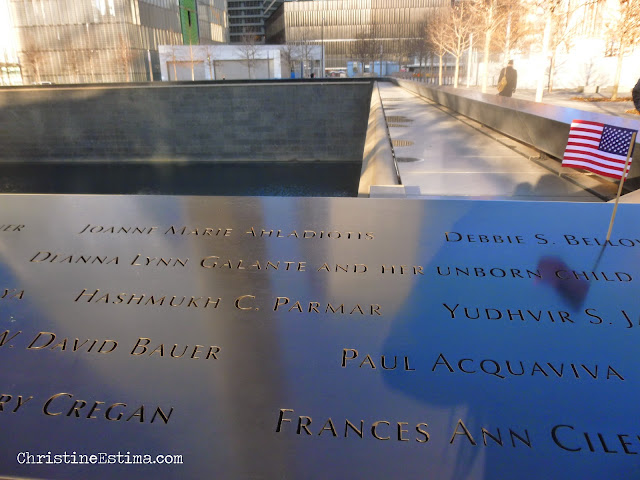 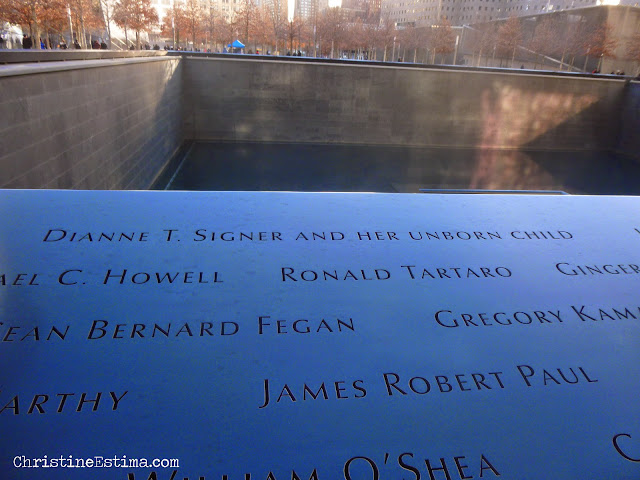 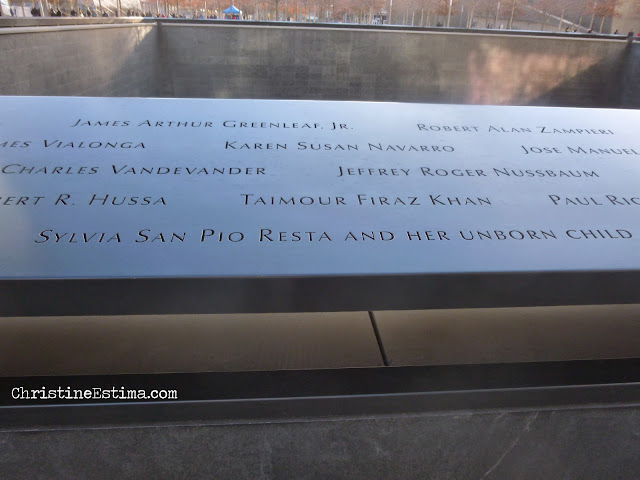 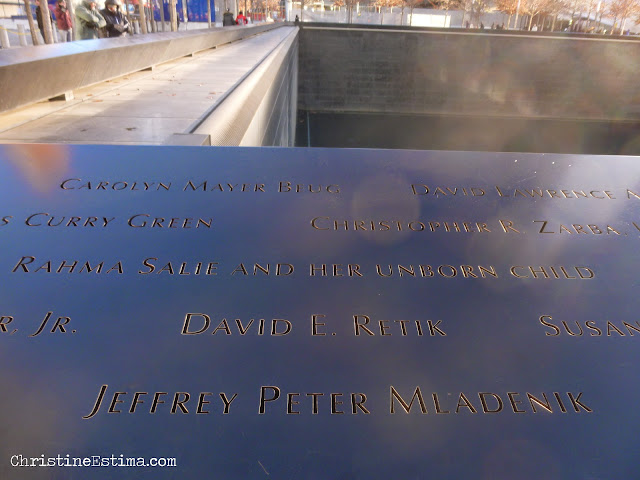 Rahma Salie and her unborn child 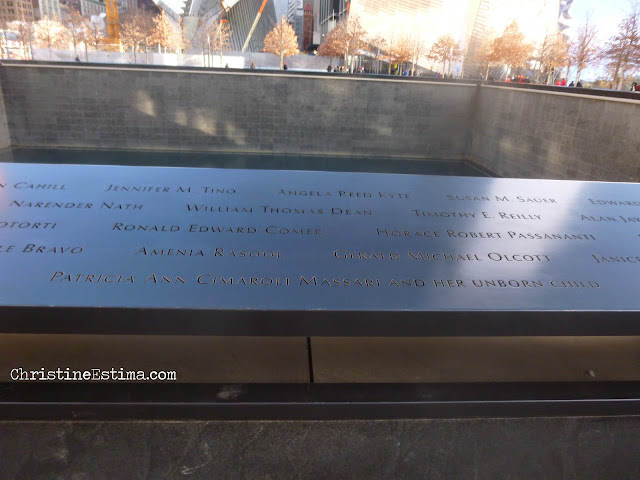 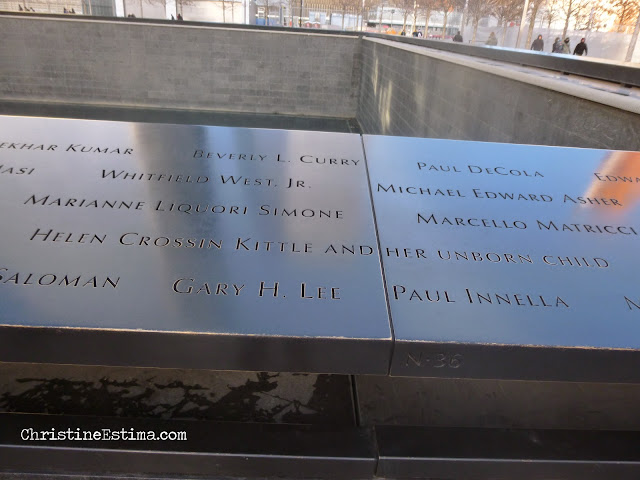 See what I mean?

Since it has been over 13 years since this event, we’ve all had plenty of time to familiarize ourselves with some of the names of 9/11. As I was reading the names off the fountain,  I actually recognized some of them. 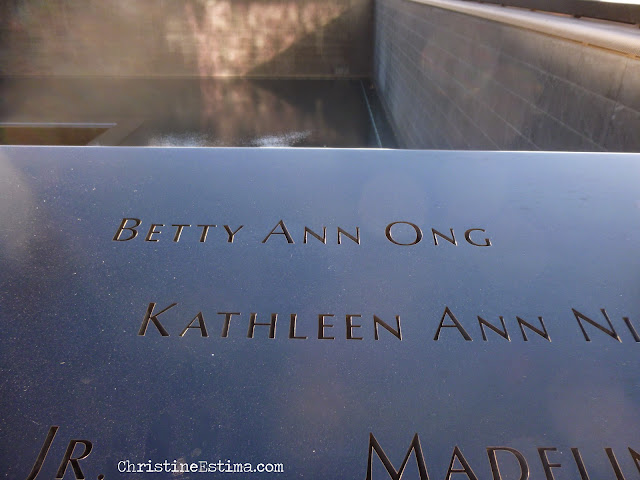 Betty Ong was a flight attendant on Flight 11, the first plane which crashed into the North tower. She was on the phone with American Airlines emergency line when her plane crashed into the tower. You can hear her right up until the plane crashes, then you don’t hear anything, except the AA crew on the other end of the line confirming they’ve lost her. It’s not disturbing per se, it’s more haunting. 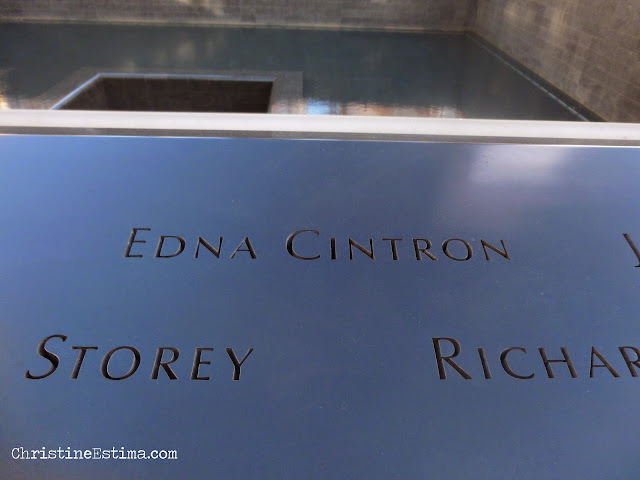 Edna Cintron has long haunted me. Her’s is a strange story. When the first plane hit the North Tower, it is believed that everyone on the impact floors were killed instantly. But then in the footage, if we magnify, we can see a woman standing in the gaping plane-shaped hole, waving for quite some time. She has a shock of ginger curly hair, is wearing a black shirt and khaki slacks. Here is footage here and here. At first when I came across this story years ago, I thought it was the work of some of the conspiracy truthers that populate YouTube (and there are many of those nutters).

But when I was at the museum, they showed this photograph and the caption said that the museum had confirmed with her family that that was indeed her, based on what she was wearing that day, her hair, and where she worked in the Tower. She died when the North Tower fell, but somehow survived the initial plane crash. That gaping plane-shaped hole should have been thousands of degrees hot because of the fire, but as I’ve learned, the fire caused by the jet fuel would have actually burned out really quickly, it was the secondary fires engulfing the furniture, drapes, paper, and other items within the towers that kept burning and caused the collapse. It is impossible to tell if she was injured by the initial plane crash, but I would wager that since she waves her arm for over an hour, doesn’t fall off the ledge (thus no head-trauma causing dizziness and no smoke-inhalation causing unconsciousness), and her clothes appear to be unscathed (not burned off from fire, or ripped from debris), she seems to be okay. Such a haunting, strange story. 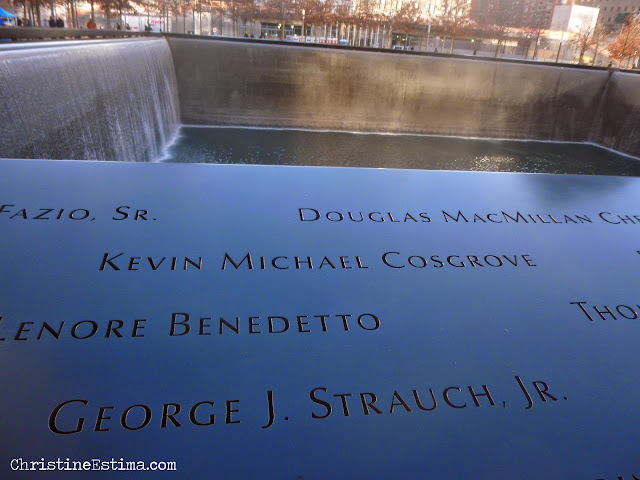 Kevin Cosgrove. I remember him because he was on the phone with emergency workers when the towers fell, and you can actually hear him dying. This is extremely disturbing and so please use your discretion. 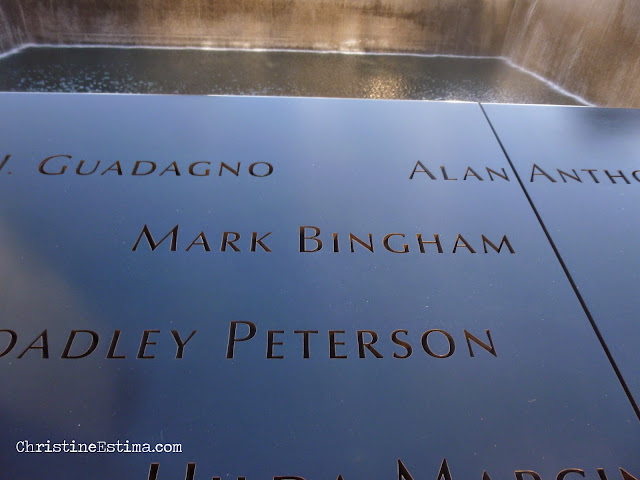 Mark Bingham was on the United 93 plane and is believed to have orchestrated the plan to overtake the plane from the hijackers, preventing them from crashing it into the White House. He was one of the first heroes of 9/11.

Now I’ve been to New York lots and lots of times. The first time I was there in 2007, Ground Zero was still a gaping hole, barely cleaned out and still under construction. I’ve walked the streets of lower Manhattan countless times, over and over again. But now that the Freedom Tower is finally completed, and the WTC memorial complex is open to the public, this visit to New York, for me, was somewhat different. There just were no more visible remnants of what happened there. You can walk Lower Manhattan and, yes, while there is still a lot of construction happening in the area, you would never know a massive terrorist attack happened there. You would never know lower Manhattan was blanketed with twisted steel, sulfur, dust, debris, paper, and body parts. It’s so strange to walk Vesey or West Street or Greenwich or Church or West Broadway. These are the places that were completely blanketed. Life goes on, people move on. I just wonder how does anyone look at their scars and not hate the world? 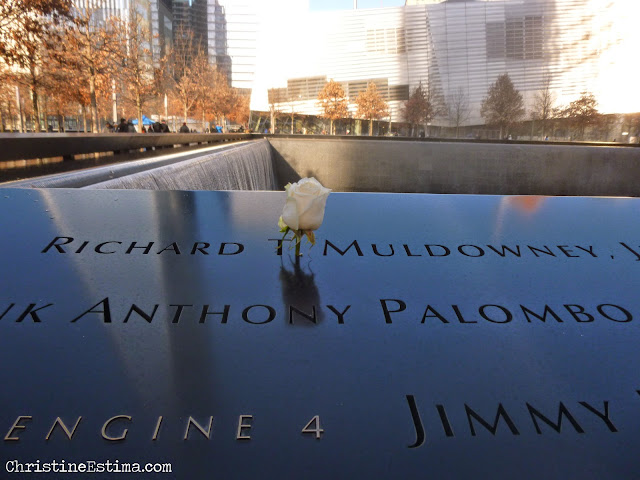 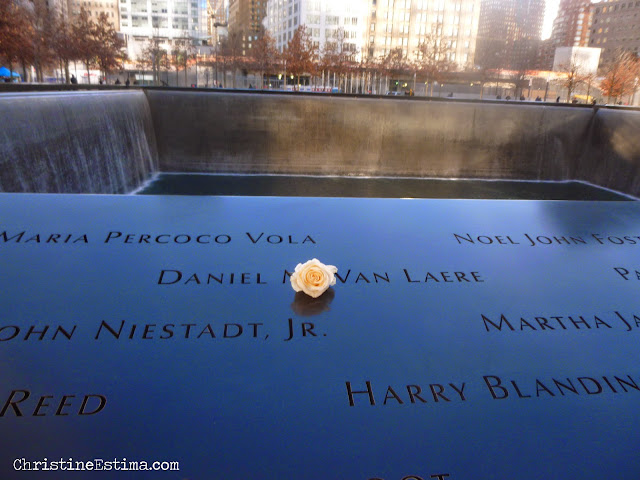 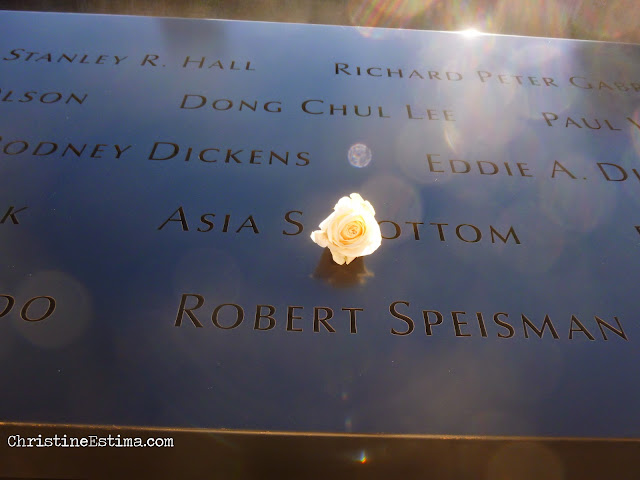