Day 1 in Warsaw is complete! And what a packed day! When I arrived the night before from my short flight from Brussels, my lovely hotel room in the centre of the city with a big warm comfy bed and dinner awaited!

I love waking up in an Eastern European hotel room overlooking the bustling city. I feel like Jason Bourne.

Like I posted about last time, I had been to Warsaw before and it’s strange how the human brain works because I actually remembered where everything was! I had a sense of direction, I knew where the landmarks were, and I felt perfectly at ease.

This is the gorgeous Palace of Culture and Science just around the corner from my hotel. It was built by Stalin, modelled on the Empire State building, much smaller but just as grand. The people of Warsaw tend to hate it because they were taxed heavily to pay for it… ah Stalin.

So to begin the day, all us POLEKO delegates and I were ushered to the Polblume recycling plant to see what one of the leaders of European recycling can teach Canada about going Green and truly espousing the idea of waste-not-want-not. Funded by the EU, they collect, treat, process, recover, and recycle electrical and electronic equipment, like batteries, circuit boards, glass, metals and polymers. That may not sound so high tech, but when they actually take old batteries and recycle them into new batteries, something that Canada doesn’t really do. Also, walking around their plant was actually pretty cool. There was this giant cub of compacted electronics, and it seems a pair of surgical scissors survived the event.

To me, that’s super cool.

Those are two giant crates of discarded televisions. You could make a giant monster out of televisions with these. If any of my readers like reusing old/found materials to create art installations, this plant is like your Mecca.

Next stop on the tour was to the Warsaw Uprising Museum. I’m hoping that most people know by now about the 1944 civilian uprising in Warsaw that saw an underground movement attempt to drive the Nazi occupiers out of the devastated city. I mean, you can’t go through life without knowing about the absolute devastation Poland faced during WWII. The invasion of Poland is literally what kicked off the war in September 1939, the largest death camp Auschwitz-Birkenau is located in Poland, and they fought so bravely from behind the Ghetto walls and from behind occupied lines to save their people.

The museum was massive, and we didn’t have much time there unfortunately, so I tried to see as much as I could. They have excellent exhibits, most of it audio-visual. I actually sat and watched reel after reel of excellent documentary footage taken from the streets, close-up and in the face of the revolt and of the captured Nazi soldiers. They also had a great 3D film that reconstructs Warsaw at the end of the war, as it lay in absolute ruins. The city was levelled to the ground, so when you walk around Warsaw now, the entire old town had to be rebuilt from city photographs. Some old buildings were able to salvage the foundations or perhaps loading walls, but Warsaw was basically razed to the ground.

I didn’t take too many photographs inside the museum because I was watching so much archival footage, but here are a few. If you’re in Warsaw, you must visit the museum!

Look at this gorgeous Meteor typewriter! You all know typewriters are my kind of pornography, but this one was used by the Uprising in order to galvanize and organize the revolt. This typewriter changed history!

You know what I love about Warsaw and her streets?  Sometimes you can turn a corner, and realize you cannot find any traces of the 21st century anywhere. Bless this town.

As I type this, I am running to catch my flight from Brussels Charleroi Airport to Warsaw Chopin! As I previously blogged about, starting today, I will be in Warsaw, then to Lodz and finally to Poznan to blog and tweet about Poland’s history, economy and environmental protection as a guest of the Polish Ministry of Economy!

I haven’t been to Poland since 2006 so I’m extra eager to see that wonderful country and people again. Here are some snaps from that epic 2006 European Extravaganza:

The old town of Warsaw at dusk. From what I remember, the entire old town was understandably destroyed during the Warsaw Uprising and the duration of World War II so they actually rebuilt the old town using pre-war photographs as a guide!

I loved the colours of the city.

And the breakdancing! The city was so alive with fervour and energy.

For years, this was the best photograph I felt I had ever taken. Those people at the end of the alley walked by just as I plunged down on the shutter, and it created a very haunting moment. I look at this photograph and I see a lot of flaws now, but I always am reminded of how I was discovering my photographic style and Warsaw helped facilitate that.

After a lot of sleuthing and getting lost a bunch of times, I also found all by myself the last remnants of the Warsaw Ghetto Wall. Built by the occupying Nazis, this wall cordoned off an area of just 3.4 square kilometres that held over 400,000 Jews. Just think about that for a second. Imagine in Toronto, the space between Harbord Street to the CN Tower inhabited by 400,000 people. That’s insane. Of course, most of the Ghetto and the wall were destroyed by the war and of subsequent redevelopment, but there is still a small section standing, and on this particular day in the summer of 2006, I had it all to myself.

Touching the wall was something else.

I hope to have more adventures and eye-opening experiences over the course of this trip, and I’m very humbled and grateful to have been chosen to participate!

And even better – I’m bringing along one of my favourite people ever: Anny Chih! Many of you might remember way back in 2009 when both Anny and I were Top 50 finalists in the global Best Job in the World campaign. We were strangers from opposite sides of the country united through that experience, and we became great friends! We’ve explored Vancouver, New York, and Toronto together, and there’s no one else I’d rather explore Poland with 🙂

Keep an eye on this blog and on the Twitter hashtag #Polska14 to keep up with all of our Polish activities!

See you guys soon in Warsaw!

#Polska14: I’m being sent on a Polish adventure! 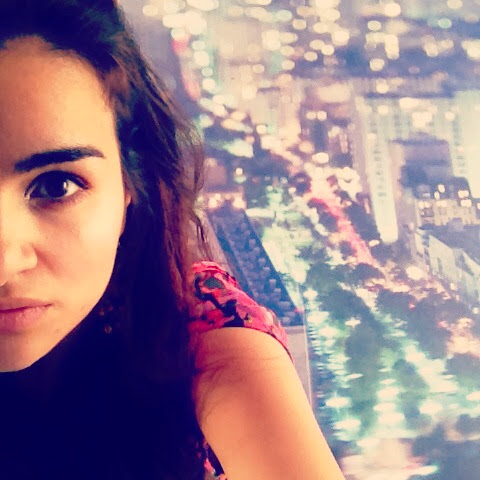 Some of you might remember in 2012 when I was invited by Eurail.com to blog & tweet my way across Europe using the rail network (read up on that month-long journey in my Eurail 2012 category!), or in 2011 when I was invited by VIA Rail to vlog and blog my way across Canada on the cross-Canada sleeper train The Canadian. There was even that weekend trip to Montreal for Labour Day 2011, courtesy of Ford Canada, who lent me a brand new Ford Fusion 2.5 for the roadtrip!

Now I’m very pleased to announce that the Ministry of Economy of the Republic of Poland and Ajencja M Promotion have invited me on a press/media trip (known in the travel industry as a FAM trip) to Warsaw, Lodz, and Poznan! The week-long trip will have a special focus on Polish history, environment and economy, which will culminate in my participation in the POLEKO 2014 conference in Poznan, which is the International Trade Fair of Environmental Protection. This trip was open solely to Canadian writers as the trip is part of the Polish Economy Promotion Program in Canada, and they want me to blog and tweet all about it!

I’m extra excited about this because I haven’t been to Poland since 2006 when I backpacked across Warsaw and Krakow (with a special trip to Auschwitz-Birkenau) and I really fell for the Polish landscape and people, so another visit has been long overdue!

The trip begins October 12th, so make sure to check this space, and also follow along with my adventures using the #Polska14 hashtag on Twitter.

So if you spot me mad-dashing through a few airport terminals over the next little while, you know why.